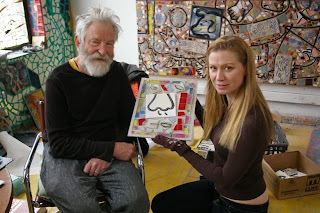 In March of 2008 I met Isaiah Zagar in his studio in the South Street area of Philadelphia. He was upstairs working tirelessly with an assistant that he kept correcting. Seemed she wasn’t very good at assisting. As we sat at a table talking and looking over a cool book of drawings that a friend had just given him, she would try to chime in or comment. Isaiah would shush her and tell her to focus on her work.

I asked how long she’d been working with him. He barked a laugh and slapped his knee, “She wandered here just around 10:00 this morning and I put her to work.” Turning toward the work area where she was breaking tiles, “What is your name again?”

“Voilet” was her response. She also mentioned that she was hungry. Isaiah nodded and told her that there was no time to eat yet, but that later she could have dinner with him and she could pay the check. I’m pretty sure he didn’t mean that last part, but he was having such fun being a character, I at least got the idea that they’d …
Read more
More posts