Showing posts from September, 2012
Show all

WHEN DO WE GRADUATE TO SOPHOMORIC HUMOR? 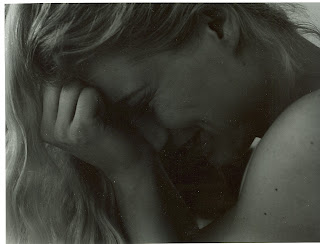 Kids find anything related to the potty hilarious. It's a universal child fact. Ask any parent, they'll tell you. It's vaguely off-putting to be having a pleasantly mature conversation with your child (OK, for me it's a mature mishmash of Chinglish) and be speaking to them as an adult when all of a sudden Ducky blurts "Wait! I poo poo!" and jumps up to fart away from me. Giggling she gleefully sprint-dances to her chosen spot and loudly passes gas. Then she practically has to hold herself up against the nearest wall as she manages to say, "Excuse me" around her giggles. Yes, we've explained that poo poo is different than farting, but neither of our girls is interested in changing their use of the words "poo poo". Oh, they don't miss an opportunity to tell on each other for passing gas and stinking up the bathroom before the other one has to take a bath. "Fah-dah! Jieh Jieh go poo poo (giggle) when I bend down for my bru
Read more

LEARNING TO BE A MOTHER FROM MORNING RADIO SHOWS

September 20, 2012
I'm scarred from my morning drive! And I'm sensing a disturbing trend on morning radio. Yesterday while driving my daughters to school a DJ was interviewing the writer of the book SHITTY MOM. The author and callers bantered back and forth about all of the ways that most of us are bad mothers. I casually glanced in the rear-view mirror at Ducky and Socrates, and felt relatively comfortable with the content because, hey, their English is coming along, but their comprehension isn't 'witty banter' quick yet so it's cool for me to stay tuned in. As I drove I eagerly awaited the author's voice to come over the airwaves into my car and give me crucial knowledge of behavior that I must avoid lest I be judged a shitty mom. Listening intently I made mental notes: Don't yell, lose my temper, ridicule or physically abuse my kids. Check. Gotcha.  I'm happy to say that I'm not a yeller, I don't hit the girls and I'm a firm believer in building up
Read more 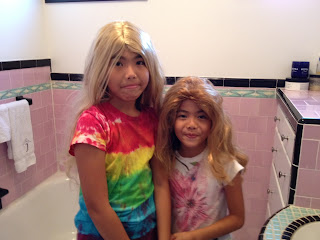 Ah, Los Angeles and the white hot pavement of Hollywood! Well, today it was 105 degrees outside and the whole family headed off for our first trip to the Glendale Galleria to beat the heat and buy Ducky some new sneakers. Dang! This growth spurt is nothing short of miraculous and she's outgrown 2 pairs since we've started buying shoes for her 4 months ago. Anyhoo, focusing on tennies is not very fun when there are crazed Halloween costumes everywhere you look right now -- which leads us to the photo above. Both Socrates and Ducks have a fondness for Rapunzel and ask for every published iteration to be read to them at bedtime. Usually it's Hudson's pleasure to read to them, but once I read it and was intrigued to learn that Rapunzel is taken from her parents by a witch. Ah... I don't know if Ducks registers any literal identification with this literary damsel, but now that I'm a mother, I'm no longer surprised by how simple and Freudian life really is
Read more

September 06, 2012
Well, if our daughters ever want to emancipate from us, here is the written material that they can take to a judge against me. OK, I know that they (whoever they are) always say, "kids don't come with a handbook." As in the old lame attempt at levity during a boring party: Father 1: Oh, kids these days! Father 2: I'll say! And they don't come with a handbook! Father 1: Heh-heh. You're a real card! Heh-heh. Father 2:  Why thanks, let's go get a frankfurter. Yeah, it's a lame adage, but being a mother for less than 4 freakin months I must say, it sucks that all of the old chestnuts that used to fall out of my parent's mouths (and my friends parent's mouths) are true. So, lame "kids don't come with handbooks" sentiment aside, as parents we should have enough sense to avoid some of the stupid shit that we smack ourselves in the head after the fact for. Case in point. This past Labor Day Hudson and I took Socs and Ducky
Read more
More posts